We have all seen the movie Blade, taken from the pages of the popular Marvel comic book. Wesley Snipes brought the character to life on the big screen, and now you can experience all the excitement on the reels of a 5-reel 20-payline video slot machine.

Cryptologic, a leading online casino software provider, brings the characters and the action to you, from the comfort of your home. Blade has very attractive qualities that players look for in a slot game; wilds, scatters and a pretty unique feature that splits the reels into two with certain symbol combinations. 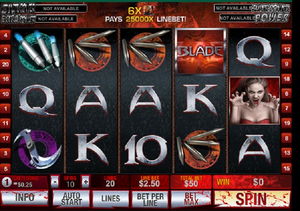 The layout of Blade is pretty similar to other slot games offered by Cryptologic. You can use the bet max feature to wager the maximum coin amount, reduce paylines, and reference the paytable with a single click. The graphics are well detailed, for the most part, and characters from the Hollywood blockbuster appear on the reels to complete winning payline combinations. The colors are dark and mysterious, and the music that plays while you are spinning the reels just adds to the theme, giving you a little something extra while you win.

The coin values range in between $0.01 and $5 with a few betting options in between the two. You can bet the maximum coin amount or choose a different level that works for you. The paylines can be reduced to even lower the minimum bet, however; if you want to experience all that Blade has to offer, it’s best you keep them all enabled.

Blade is wild and he will substitute for all other symbols in the game besides the scatter, and this will help create more payline wins for you when you play. The Blade symbol will not substitute for the Blade Logo, which is the scatter. Six Blade wild symbols will payout the maximum fixed jackpot in the game of 25,000 coins when the split feature is activated.

The scattered Blade Logo will payout wins based on your total bet, and the more you land on the reels; the more cash you will win. Only three symbols are needed to activate this payout, the total multiplier can be found on the paytable for easy reference. This symbol will also initiate the free game bonus feature. Also, the scatter will act as an additional wild when in the free game feature.

The Free Game feature is activated by three, four or five Blade Logo scatters. Once you trigger the feature you will receive 15 free spins with a growing multiplier. What this means is with every winning spin the multiplier increases in increments all the way up to 5x. The only downside to this feature is that the multiplier may also decrease without a win, so the more wins the better.  Once all the free games are played, you are returned to the normal game mode where you can continue on your path of winning on the reels. 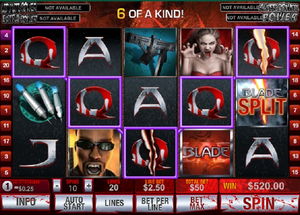 There is a really unique feature called the Blade Split Feature.  This is activated by a single symbol on the last reel, the Blade Split symbol, and it will only appear on reel five. If it lands on the reel it will split the reel into two, making the ultimate payline win possible. Every icon on the reels may be split, except the scatter.

The Marvel Mystery Jackpots are attached to Blade, and you can trigger these simply by playing. The trigger is random and if you activate it, there will be a timed game where you must match three symbols to the relative jackpot. There are four jackpots up for grabs, Ultimate Power, Extra Power, Super Power and Power.

I would definitely play Blade again. This game is really unique with the sixth reel option, it gets you excited about playing and it’s just really a neat game all around. If I had to rate it on a scale of 1 to 10, my score would be 8.5, only thing I missed was having a second screen bonus features like many of the other games in the same category.

This entry was posted in Cryptologic and tagged Marvel Slots. Bookmark the permalink.