Call of Duty 4: Modern Warfare is an online video slot powered by Cryptologic software and can be found at Betsafe Casino Black. The layout of the game is 5-reel and 25-paylines, which is common for the newer slot games released by the platform.

We have all heard of the extremely popular video game Call of Duty series (which this slot is based on) and what’s not to like? There is war, guns, action and more than exciting bonus features. Any adrenaline junkie could appreciate the thrill this game provides both on and off the reels. 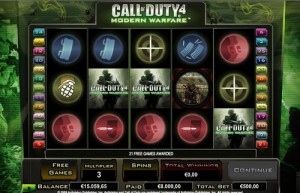 The slot game is well designed and uses all of the familiar symbols from the video game on the reels. The design is sleek and dark, and the theme is carried out well and not overbearing. The sound effects that are fitting to the slot, which only adds to the entertainment value. Winning symbol combinations provide exciting animations which engage the player and get them in the mood for an action packed slot adventure.

High rollers and average players will find this game fitting to their bankroll as coin denominations start at a small €0,01 and rise all the way up to €20, with many betting options in between. No matter the coin value used the payouts are impressive and the top fixed jackpot in Call of Duty 4: Modern Warfare is a generous 5,000 coins for five Soldier symbols on an enabled payline.

The wild in Call of Duty is the Soldier symbol and will substitute for all other icons on the reels other than the scattered logo. Not only will the Soldier help complete winning combinations, it will also double all wins it helps create. Randomly, when a wild helps create a win, a Soldier will appear on the reels holding a bomb which creates exploding wilds; this can substantially increase the players chances of a jackpot.

The scattered Call of Duty Logo will trigger scatter pays and the second screen bonus feature when three, four or five land on the reels in any position. Scatter pays are multiplied by the players total bet according to the paytable and will payout for two or more symbols in any spot on the five reels. 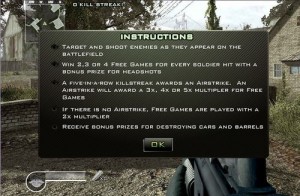 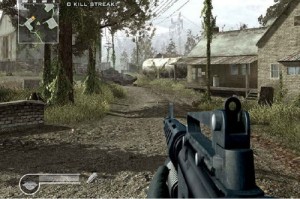 Once the free games are activated by the scatters, players will be taken to a warzone where they will shoot their enemies as they appear on the screen. Every enemy the player destroys will award free games; up to four free games can be won for each enemy. Also, if the player is skilled at the art of shooting, a head shot will award an additional bonus prize for the player. If you make five consecutive hits, the air strike is triggered and will award even more bonus prizes.

Keep an eye on the health bar on the screen, when it depletes the bonus game ends and you are returned to the reels where the free spins will be played. If an air strike was triggered during the bonus feature the multiplier could be as high as 5x for the free games. Without the air strike,the games may still prove to be profitable as all wins are doubled. The free games can be re-triggered and the player will receive the same number of free games they won during the war feature.

This entry was posted in Cryptologic. Bookmark the permalink.