We all have seen the famous Hellboy movies. The movie series, based on the famous comic book character that destroys monsters and searches endlessly for the Relic of Power, has been super popular in the box office. He himself is a demon, but not what you think; he is one of the good guys. His background is a bit tragic and he uses his past to fight the enemies, keeping the Bureau of Paranormal Research and Defense safe. All of the characters from the comic and movie find their way onto the reels in cartoon like form on the 5-reels and 20-paylines. 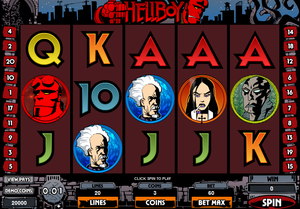 The story of Hellboy is he was brought to earth during WWII and was rescued, raised and taught to fight in the USA. He is part of the BPRD and will do anything to protect its honour, which makes for an exciting slot game, especially the bonus features in my opinion. This is one of the most popular Microgaming games online, and for good reason; the paytable is profitable, the features are engaging and the theme is awesome. The graphics are in both 3D and 2D, which also changes it up while playing.

The Hellboy logo is wild and will help complete winning payline combinations by substituting for other symbols. It is very helpful to have a wild symbol, in any slot game, especially one that pays a large jackpot for five on an enabled payline such as this one. What is more, the wild will double all wins it helps make on the reels.

Hellboy’s oversized hand is the scatter and will land on all of the reels. When it does it can pay up to 500x your total bet depending on the amount of scatters that trigger the pay-out. The scatter wins are awarded for 2 or more symbols in any position. Three or more scatters will trigger the Underworld Bonus feature. 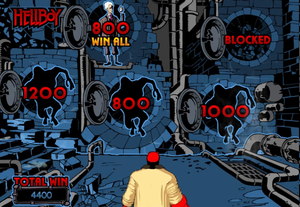 Once you move to the Underworld bonus you need to advance through four levels and save Hellboy’s friends. Destroy evil monsters, fight against evil and if successful you will receive the Relic of Power. The further you go in the bonus feature the more you win. 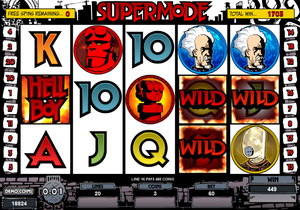 Supermode is randomly activated and once it is triggered you will receive 10 free games with held wilds. This means that wilds will be held in position while the reels spin around them, this could make for a huge bankroll boost. 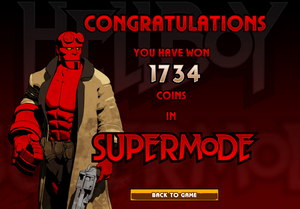 There is another common feature in Hellboy called the “Gamble”. This feature is optional and you can double or even quadruple your win. The object of the game is to guess the colour or the suit of the face down playing card. If correct, you will be able to gamble again or collect. If at any time during the gamble you are wrong, all wins are lost; even those made outside of the feature.

If you are a fan of the movie, the comic or just an action packed slot machine, Hellboy delivers. There are many fans of this Microgaming slot game, and although it’s one of the more classic games, it’s still going strong in the player market today. Find Hellboy at your favourite Microgaming powered online casino, in both the instant play and download version of the casino client.

This entry was posted in Microgaming. Bookmark the permalink.